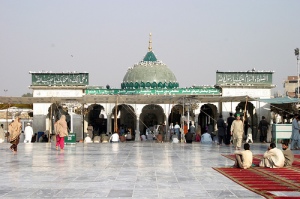 He was born around 990 CE near Ghazni, Afghanistan during the Ghaznavid Empire and died in Lahore (in present day Punjab, Pakistan) in 1077 CE. His most famous work is Kashf Al Mahjub (“Unveiling the Veiled”) (کشفُ المحجوب), written in the Persian language. The work, which is one of the earliest and most respected treatises of Sufism, debates Sufi doctrines of the past.

Ali Hajvery is also famous for his mausoleum in Lahore, which is surrounded by a large marble courtyard, a mosque and other buildings. It is the most frequented of all the shrines in that city, and one of the most famous in Pakistan and nearby countries. His name is a household word, and his mausoleum the object of pilgrimage from distant places.

Ali Hujwiri studied Sufism under Abu ‘l-Fadl Muhammad, who was a student of Abu ‘l-Hasan al-Husri. Abu ‘l-Fadl Muhammed bin al-Hasan was well-versed in tafsir and riwayat. Ali Hujwiri traveled far and wide through the Indus to the Caspian Sea. Among the countries and places which he visited were Adharbayajan, the tomb of Bayazid at Bistam, Damascus, Ramla, and Bayt al-Jinn in Syria. In Khursan alone he is reported to have met 300 Sufis.[5] Al-Hujwiri was associated with the most well-known Sufi orders in the subcontinent, such as the Qadiri, Suharwardi, Naqshbandi and the Junaidi orders. Hujwiri belonged to the Junaidia school of Sufism, founded by Junaid Baghdadi, a major Sufi saint of Baghdad. Hajwiri is also viewed as an important intercessor for many Sufis. Moinuddin Chishti Ajmeri, a chief saint of the Chishti order, stated that an aspiring murid (disciple) one who does not (yet) have a murshid (spiritual master), should read Ali Hujwiri’s book Kashf al-Mahjub, as that would be (temporarily) enough for his spiritual guidance.  He settled for some time in Iraq where he had a short experience with married life.

Al-Hujwiri was a contemporary of al-Qushairi. During his travels, he met with many eminent Sufis, and saw and felt the slow transformation of Sufism from simple asceticism and adoration of God to a highly developed theosophical cult considerably influenced by pantheistic ideas. He is the link between Mysticism as it developed in Persia and Khurasan, and the form it took in the Indo-Pakistan subcontinent.

Later his spiritual teacher Hazrat Abul Fazal ordered him to go to Lahore to teach Sufism. He said: “Hazrat Shah Hussain Zanjani is already there for this purpose, so then why should I go to there? Hazrat Abul Fazal said: “It’s none of your business, just go to Lahore.” So he left Syria & came to Ghazni. From Ghazni he went to Peshawar & then to Lahore, in 1041 A.D (431 A.H). When he reached to Lahore, he saw that people are taking a coffin towards the graveyard for burial. He asked who is he? People replied that it is the dead body of Hazrat Shah Hussain Zanjani. After hearing that, he understood why his teacher Hazrat Abul Fazal sent him to Lahore. After reaching to Lahore, he started to preach Islam & built a mosque there.

Although a Sunni Hanafi, Hujwiri’s theology was reconciled with the concept of Sufi annihilation. However he strenuously campaigned against the doctrine that human personalities can be merged with God, instead likening annihilation to burning by fire which allows the substance to acquire fire like properties while retaining its own individuality. He also was a great upholder of the Sharia and rebuffed the idea that outward observances of Islam are not important for Sufis. Hujwiri believed that individuals should not claim to have attained “marifat” or gnosis because it meant that one was prideful, and that true understanding of God should be a silent understanding.

Ali-Hujwiri is said to have died on the twentieth of the month of Safar 465 H.E, but the date, the month and year are all conjectural.

When Khwaja Moinuddin Chishti came to Lahore in 561 A.H (1165 AD), he stayed at the tomb of Hazrat Ali Hajveri for two weeks, where he medidated. And when he finished his meditation, he said a couplet in Farsi:

Meaning:
Ganj Buskh (Bestower of Spiritual Treasures) is a grace to the world; a manifester of God’s light.
A perfect spiritual teacher for the beginners; a guide for perfected.