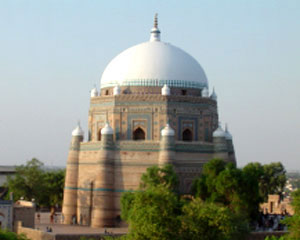 Baha-ud-din Zakariya was a Sufi of Suhrawardiyya order (tariqa). His full name was Al-Sheikh Al-Kabir Sheikh-ul-Islam Baha-ud-Din Abu Muhammad Zakaria Al-Qureshi Al-Asadi Al Hashmi. Sheikh Baha-ud-Din Zakariya known as Bahawal Haq was born at Kot Kehror (Karor Lal Eason), a town of the Layyah District near Multan, Punjab, Pakistan, around 1170. His grandfather Shah Kamaluddin Ali Shah Qureshi Al-Hashmi arrived in Multan from Mecca en route to Khwarezm where he stayed for a short while. In Tariqat he was the disciple of renowned Sufi master Shaikh Shahab al-Din Suhrawardi who awarded him Khilafat only after 17 days of stay at his Khanqah in Baghdad. For fifteen years he went from place to place to preach Islam and after his wanderings Bahawal Haq settled in Multan in 1222.

Baha-ud-din Zakariya died in 1267CE and his mausoleum, Darbar Hazrat Baha-ud-din Zakariya, is located at Multan. The mausoleum is a square of 51 ft 9 in (15.77 m), measured internally. Above this is an octagon, about half the height of the square, which is surmounted by a hemispherical dome. The mausoleum was almost completely ruined during the siege of 1848 by the British, but was soon afterward restored by the Muslims.