In one of the battles that the Muslims waged against the Romans, the Muslims – under the commandment of Maslamah (rahimahullaah) – surrounded a city that had a tall and well-fortified wall. The siege went on for months.

Then one night, one of the Muslim soldiers came to General Maslamah and told him of a hole that he had accomplished to bore through the wall. “It is only large enough for a slim soldier.” He knelt closer. “Quickly, send with me someone who can squeeze through and fight the army on the inside until he has opened the gates for all of us to enter.”

Maslamah sent out the news, and that night someone volunteered. In a sweeping assault, the gate was opened and the Muslims were victorious.

Maslamah, overwhelmed with happiness, sent out the word that the soldier that entered the hole should come forward. No one showed. A day passed and the request was repeated. Another day, then another. No one arrived to take credit.

On the fourth day, a soldier approached Maslamah, his face wrapped in a scarf. He said to him, “I have news of the soldier that entered the hole.”

Maslamah sat up sharp, “Tell me who it is?”

“First, however,” said the soldier, “he has three conditions before exposing himself. Do you agree to this?”

“It is agreed,” Maslamah said.

The soldier, uncovering his scarf, said, “It is I. I went through that hole only for the sake of Allah.” Then, turning, he walked away.

After that day, Maslamah was often heard praying to Allah, “O Allah, (on the Day of Resurrection) grant me companionship with the soldier of the hole.”

Sometimes at any Islamic school, there are children who pray at the back, but the actions are better described as ‘playing’  Then when the head master or whoever they consider to have authority above them approaches, they all stand erect in complete devotion.

They are children and Allah will not take them to account. However, there are many adults that do this exact thing but on a more serious scale. The ingredient that we all need to work on throughout our lives as Muslims is Ikhlas (sincerity) and, insha’allah, that shall be our topic for today.

Sincerity in all we do is a commandment of Allah:

[Say, “Indeed my prayer, my rites of sacrifice, my living and my dying are for Allah, Lord of the worlds. No partner has He. And this I have been commanded, and I am the first (among you) of the Muslims.”] Surah Al-An’aam 6/162,163

[And they were not commanded except to worship Allah, sincere to Him in religion, inclining to truth, and to establish prayer and to give Zakah. That is the correct Deen.] Surah Bayyinah 98/5

In defining Ikhlas, Al-Jurjaani (ra) said that it is to not seek any audience for your deeds other than Allah.

Commenting on the verse:

[He who created death and life to test you (as to) which of you is best in deed] Surah Al-Mulk 67/2,

Al-Fudayl ibn ‘Iyaadh (ra) said, “It is those deeds which are most correct and most sincere.” The students asked, “O Abu Ali, what are deeds that are correct and sincere?” He said, “If a deed is done sincerely, yet is not done correctly, it will not be accepted. And if a deed is done correctly, but not sincerely for Allah, it will not be accepted. It must be done sincerely and correctly. Sincerely, as in for Allah alone; Correctly, as in accordance to the Sunnah.”

He then recited the verse of Allah:

[So whoever would hope for the meeting with his Lord – let him do righteous work and not associate in the worship of his Lord anyone.] Surah al-Kahf 18/110. (See Madaarij As-Saalikeen 3/93)

With Ikhlaas we can be saved from misguidance as Prophet Yusuf (as) was saved. Hear Allah’s words:

[And thus (it was) that We should avert from him evil and immorality. Indeed, he was of Our Mukhlaseen servants.] 12/24

With Ikhlaas the books can be turned in our favor in the last minutes of our lives just as what happened to the man that murdered 99 men. Allah (swt) saved him in the end because of his sincerity in repentance.

With Ikhlaas one will be saved from Hellfire and granted a lofty position in Jannah.

Dear brothers and sisters, we must understand that there are certain things that contradict our Ikhlaas to Allah. Of these things are three, Reyaa’, Sum’ah and ‘Ujb.

Reyaa’ is to perform an act of worship with the intention of showing it off to people, seeking their praise or some other vanity. Thus this person is seeking to be glorified or praised or hoped for or feared through this action. An example of this would be such as donating a large sum of money in order that people may think the contributor is generous.

Sum’ah is those verbal statements that a person does for the sake of people. Such as someone making ballooned threats just so others would think he is courageous.

Ibn Al-Mubaarak (ra) said, “Perhaps a great deed is belittled by an intention. And perhaps a small deed, by a sincere intention, is made great.”

‘Ujb is the cousin of Reyaa’. It is when a person becomes impressed with himself for the ‘great’ deeds that he has done.

This and all the other types are viruses that can kill our actions and turn them against us on the day of Resurrection.

Ya’qoob al-Makfoof (ra) used to say, “The sincere one is he who hides his good deeds in the same way that he would hide his bad.”

From the Seerah, as Sa’d ibn Waqqaas narrates: … as for Ikrimah ibn Abi Jahl, (after the conquest of Makkah) while escaping by sea, a terrible storm befell them. The owners of the boat shouted, “At this moment pray to only God and pray sincerely, for your gods cannot avail us in any way through salvation from this storm.” ‘Ikrimah said, “By Allah, if Ikhlas can only save me on the sea, then on land nothing but it can save me.” (He then raised his hands and pronounced), “O Allah if you save me, you have upon me an oath that I shall not rest until I arrive at Muhammad (saw) and place my hand in his.”

He then came to Rasul Allah (saw) became Muslim, and was later martyred in Jihad.

Sincerity is a topic that is not only key to Islam, but it is also a subject that the Kuffaar and philosophers have pondered for centuries. The English have a saying that goes to the effect of: To hunt with the lantern of Diogenes.
Diogenes was a Cynic Greek philosopher who lived about 320 years before Prophet Eesa – alayhis salam. He believed there was no sincerity – no Ikhlaas – in any human being. To vividly prove his point, he was said to have gone about the streets of Corinth in broad daylight with a lighted lantern looking for a sincere man. From here the English coined the term To hunt with the lantern of Diogenes when speaking of a group of people whose sincerity is extremely absent.

Indeed insincerity in our actions is something very dangerous and can lead a person to ruin. Ibn Masood (raa) would advise his students, “If your intention is one of these three, do not seek knowledge: To shame the ignorant, or to argue with the Fuquha’, or to cause people to turn their faces in your direction. Intend with your actions and words that which is with Allah, for indeed that which is with Allah shall remain and everything else shall perish.”

In conclusion, Ibn Al-Qayyim (ra) said, “Deeds without sincerity are like a traveler who carries in his water-jug dirt. The carrying of it burdens him and it brings no benefit.”

May Allah ta’ala make us all from those whose deeds are done in accordance with the Sunnah, deeds that are done sincerely for the sake of Allah. 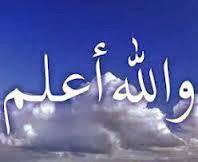 This entry was posted in Khutbas. Bookmark the permalink.