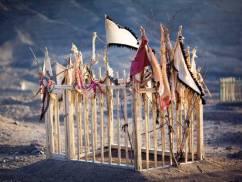 Photographer Lisa Ross is interested in exploring the liminal spaces where faith, culture and abstraction meet. In her latest exhibition in Dubai, Living Shrines, she is presenting a series of photographs of Sufi shrines in the Taklamakan desert in China, built by Uighur Muslim pilgrims. Between 2002 and 2012, the New York-based artist made several trips to the remote Xinjiang Uighur Autonomous Province in the far northwest of China to document these shrines that stand as poignant and enduring symbols of collective memory and faith in the harsh desert environment.

The shrines, known as mazars were built by the Uyghur people to commemorate Sufi saints, and many have been maintained continuously for several centuries. They are simple structures, comprising small crib-like wooden enclosures, or just a few sticks and stones arranged in the sand. But their importance in Uighur culture is indicated by the many offerings left behind by pilgrims, such as prayer flags, colourful silk fabrics, sacrificial animals, and dolls.

Ross’s ethereal photographs capture the beauty and tranquility of the desert landscape, and the simplicity and spirituality of the shrines. The tiny handmade structures appear so vulnerable, yet resilient; grounded yet otherworldly; ordinary yet extraordinarily beautiful.

There are no people in the pictures, but their presence is palpable in the fluttering flags, the carefully cut pieces of fabric, and other offerings they have left behind, and their footprints in the sand. The images convey Ross’s intimate knowledge of the culture, and her love for the land and people, but they also go beyond that to give viewers a sense of experiencing the pilgrimage, and the spiritual transcendence it signifies.

“I began this project at a time when I was really drawn to deserts. I had been working in the Sahara and Sinai deserts before a friend invited me to Beijing. I had never heard of the Uighurs or the Taklamakan desert, but when I read about the Xinjiang Uighur Autonomous Province in a travel guide in Beijing, I intuitively felt like going to this remote region. It involved a train journey of three and a half days, and then finding a rental car and a driver to take me deeper into the desert.

“When I saw these shrines for the first time, in the rugged, desolate desert I had no idea what they were. I was curious to learn more about them,” Ross says.

Over the next decade, she travelled to the area many times – on her own, as well as with people who know the region such as French historian Alexandre Papas and Uighur folklorist Rahile Dawut, who helped her to connect with the community and get a deeper understanding of the land and its history. In 2013, Ross published a book, Living Shrines of Uyghur China, which features her photographs of the mazars, and background texts by Papas and Dawut.

“When I travelled with Papas in 2004, we found a pilgrim’s guide book in the Uighur language giving information about the location and history of 86 mazars. Using this guide, we visited over 25 mazars, travelling by foot, donkey cart, bicycle, minivan, taxi, train and bus.

“The people we met were always friendly and helpful, and each journey was a unique pilgrimage. Later, I met Dawut, the author of that guide, at a conference on Uighur culture at the School of Oriental and African studies in London, and she was amazed that her book had been used by two foreigners. She invited me to travel across the region again with her, and in 2005, we travelled together in the area for six weeks. Being with her was like moving from the outside to the inside. Even though we visited remote mazars, she had family and friends everywhere, who welcomed us warmly. The entire experience created a greater desire to return and continue developing the project,” Ross says.

Her photographs become more significant in the context of the changes that are taking place in the region. With the development and modernisation policies of the Chinese government threatening to turn these living shrines into relics of the past, Ross’s images are an important record of a rich and vibrant culture on the threshold of change.

“While working on this project, I made a conscious decision to remain apolitical. Through my photographs I want to convey my personal experience of this region and culture, and also give viewers the same moving, emotional experience that I had when I saw the shrines,” Ross says.

Jyoti Kalsi is an arts enthusiast based in Dubai

This entry was posted in News. Bookmark the permalink.